Time is flying by so quickly that I didn't even record 3 months for Logan.  The pasts few months, ok, Logan's short 4- months of life, have gone so fast.  We ended up on an extended 3+ week road trip over his 3 month mark, which is where I'm placing the blame for forgetting that.  So, here goes nothing.  A lot has changed with sweet Logan over the past 2 months--which makes sense as he's doubled his age since I last recorded! 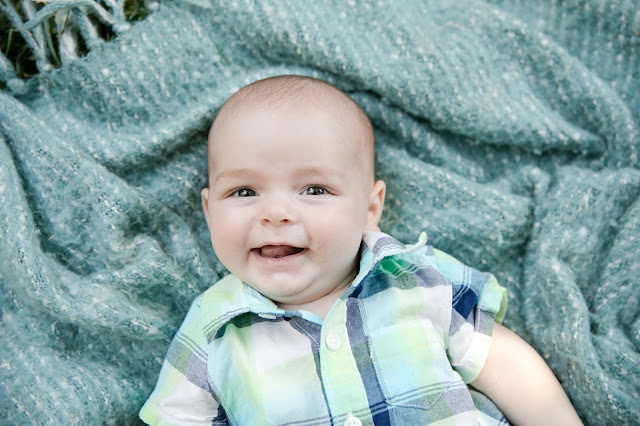 He had his 4 month check up on Monday and here's what we learned:

What else is Logan up to?

Speaking of sleep, Logan was a sleeping CHAMP on our road trip, especially the last week in wyoming--consistently sleeping all night (11 hours!) with a dream feed.  Since getting home, he is waking 1-2 times a night and it is slowly killing me. He won't go back to sleep unless he is nursed.  In wyoming he had a loud fan in his room, so we are thinking that may have helped.  Wish us luck as we start night sleep training!

As baby number three, he does not get much tummy-time...forgetfulness and loving siblings that flock to him and pounce on him whenever he's on the ground.  Despite that, he has a really strong neck and loves looking around while on his tummy.  He however can't roll over yet.  The pediatrician informed me that rolling is no longer a milestone, so no need to worry.

We have basically given up on a pacifier and Logan has found his fingers!  He loves sucking his pointer and middle finger together.

He loves attention and is much more interactive these days.  It doesn't take much to get a genuine smile or belly laugh.  Hudson is the best at getting him going!

Like his siblings, he is a total fish in the tub, and loves the pool as well. He kicks pretty crazily in the tub now and will stay there for 20 minutes easily.

We've introduced the doorframe jumper and he likes it.  He isn't really jumping much, but he enjoys hanging there and playing around a little bit.

He is still in size 1 diapers, but mainly because we still have half a box left.  He could totally wear size 2. He's barely fitting into size 3 month clothes if I want him in them, but he fits comfortable in 6 month.

Logan loves being swaddled, being carried in the ergo, or tucked in tight to his carseat with a blanket.  He pretty much won't go to sleep unless he's in one of these settings (or the swing---which we rarely use). When swaddled, he still manages to get his hand up to his mouth, while still covered by the blanket, and into his mouth.